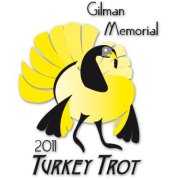 The 4th Annual Gilman Memorial Turkey Trot was on Saturday, November 19th.  It's a 5K run/walk with all the proceeds donated to the Alzheimer's Association.  We named it for my grandfather Fred Gilman who suffered from Alzheimer's disease.

This year was certainly the best so far!  We had 54 runners/walkers not including a few pre-registered runners who ended up not being able to make it.  Due to the assistance of four awesome people (Terri, Brittany, Becca, and Becky) runner check-in and race day registration went perfect.  We had 30 runners register same-day.  We are pretty sure that because of the date and the unpredictable nature of Minnesota weather, people wait to register.  Not a huge deal, but it makes it a little hard to plan.
I wanted to do this race barefoot and the temperature would have allowed it, but there is a stretch of old street that can only be described as tore up.  I knew it was bad but I was still planning on running it barefoot until I went out to mark the course before the race.  It was worse than I thought so I decided to use my Invisible Shoes instead.  I had some good conversations about them before and after the race and a few people seemed genuinely interested.  One runner (the eventual first place finisher, Mario) was wearing Vibram Five Fingers, and I also spotted someone wearing New Balance Minimus but I didn't get a chance to talk to him to see how he liked them.

I made a couple of announcements right at 9:00 am, then Race-master Terri got the runners going!  I started towards the back of the pack so I ended up winding my way through a few runners right at the start, but by the time we were just a few blocks in, I was comfortable with my pace and I settled in hoping for a good run.  I'm not really a morning runner, and I hadn't really had anything to eat so I was worried about getting tired too fast.  At 1.5 miles I checked my pace and found out I was running 8:35 minute miles!  That's about 40 seconds per mile faster than my usual runs so I was pretty psyched up.  The thrill of racing gives quite a boost to an amateur like me I guess.

I kept a steady pace through the rest of the course.  The course takes you on the "scenic route" through Dodge Center so there is a lot of turns to make sure the course ends up at 3.1 miles.  We had volunteers stationed throughout the route to make sure everyone stayed on course.  We have had at least one person go off course every year, but I'm happy to report that everyone made it through with no problems this year.  It really bugs me when people get lost because it makes me think I didn't do a good job marking the route and I really want people to enjoy the run and come back again next year.

I finished the race in a time of 27:05, which is a personal best for me so I was pleased about that.  The only thing I wasn't pleased about was that I wasn't really tired afterwards so I wish I had made a little more of a kick through the last mile.  Not a big deal since this is only my third race since I started running last Spring, and my fourth overall (I did the Bix 7 in Davenport, Iowa in 2000).  Every time I do a race I learn a little more so I hope that my PR's keep dropping.

Here's a list of the finishers in order with bib numbers and times:

We had a ton of sponsors for the run this year.  Many thanks to them!  Some of them have been with us since the first year!
Ready for a little more Gilman Memorial Turkey Trot action?  Visit Super Mario's race review for his perspective!

If you couldn't make it this year, don't worry!  The 5th Annual Gilman Memorial Turkey Trot will be held November 17th, 2012!  I already have it on my calendar, do you?

Run on, Runners!
Posted by Barefoot_Chiropractor at 10:34 PM