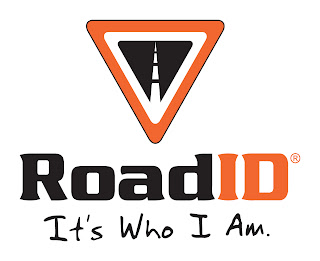 Road ID is a company that began after a near miss and a good idea.  Edward, one of the owners, was nearly hit by a truck while out running.  His father had been bugging him to carry ID, but Edward didn't think he was in any danger while out running.  After the near miss, Road ID was born.

The concept is pretty simple.  You need ID, but you don't want to carry stuff while running.  Wear the ID.  Problem solved.  The other issue is that sure you can carry stuff around, but what if that stuff gets lost in the shuffle and you are unconscious?  A friend of mine who is a rescue diver for the county told me once (paraphrasing) that the only thing an EMS crew is sure to take with them when they pick you up is your body.  That's why it's a good idea to make sure that ID is coming with you.  It may just save your life.

I was firmly in the camp of not wanting to carry stuff around, including my driver's license.  I was more worried about losing my license than I was about getting hurt and needing ID.  However, my wife likes me and wants me around.  In fact, she prefers it that way.  I thought a Road ID would be a good way for us both to get what we wanted.

Like a lot of people, I was first exposed to the company at a race.  They sponsor races by providing number bibs and they sponsored the 5K I did last June.  I'm also proud to have them as a sponsor of the Turkey Trot we just hosted on November 19th!

They offer 8 different styles of ID.  Three that are worn on the wrist, two that attach to your shoes, a chain/dogtag combo, an ankle ID, and one for your furry four-legged friend (or hairless cat).  Being a barefoot runner, I chose the ankle ID because it doubles as a holder for your timing chip during a race, solving a problem of the shoeless runner.  Double duty!  That's smart.

Besides their ID products, they also offer some night-time safety/visibility items, extra bands if you like to color coordinate your fancy purple shorts one day, and your fashionable yellow bike jersey the next day.  They have some apparel too, all at wicked low prices.  Buy some shirts and tell people you are a sponsored athlete.  They won't know that your main competitive sport is beer pong. 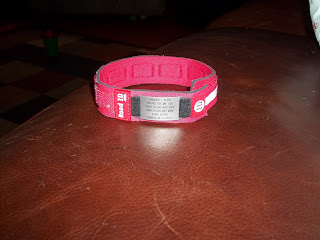 Here's a couple shots of my Road ID.  The band is neoprene and has a Velcro closure.  There is space to print six lines of text on the ID tag, and tags are interchangeable between different ID products.  There is a reflective strip that runs the length of the band to help with night-time visiblity.  The ID's are fresh and saltwater safe.  The neoprene band is very comfortable and the the thing is so light you don't even notice that it is on.  It fits above the laces when I wear it with Invisible Shoes.  There are lots of different color choices depending on the style of ID you choose, and some of the styles work great for kids. I promised a give-away so here it comes.  I have three $15 gift certificates to the Road ID store!  One of them could be yours, and here's how you make that happen.  To enter, do one or more of the following things:
Leave a separate comment below for each thing you do.  I'll count them all up and pick three winners using random.org.  The more you do, the more chances you have to win!  The contest will be open until midnight December 2nd.  I'll pick three winners and let you know who won!  Check back to see if you are a big winner!  Have I used too many exclamation points!?!
Posted by Barefoot_Chiropractor at 10:29 PM