Shootin' at the walls of heartache, Bang! Bang! I am the warrior! - Warrior Dash Review

Perhaps I would have had a faster run if I would have sang Pat Benetar to myself for the whole race.  As it stands, I forgot to do that and I finished a little slower than I would have liked.  Final course time was 45:49.75 for a 15:10/mile pace.  I wanted to break 45 minutes and had a wild goal to finish around 35 minutes depending on how the first mile or so went.  The course was harder than I anticipated, even though the obstacles were easier than I anticipated.  I was not ready at all for the hills on the course, but I guess I should have expected some big ones since we were at Afton Alps Ski Area.  Lesson learned.  Sara and I were originally going to run this together, but as she is currently with child, my Office Manager Terri took her place.  Sara is already in for next year though, assuming she isn't pregnant again.  Just kidding, Sara!

Here's a pre-race picture with Johann.  I decided not to carry him out on the course though. He has been sand-bagging on his training and was ill-prepared. 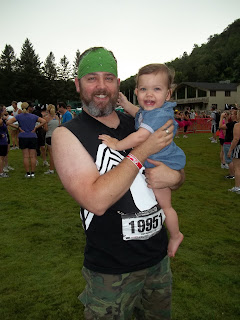 I had a notion that I might do this barefoot.  I'm glad I didn't.  I wore my Merrell Trail Gloves instead which I'm pretty happy about at this point.  Looking at the satellite photos of the course I kind of thought it would mostly be grass and dirt, but there was a metric crap-ton of gravel that I'm not ready for, plus I guess you never know what is at the bottom of those mud pits.  Either way, I'm glad I had the extra protection.

We made it to the course just after 9:00 am and made it through packet pick-up really quickly.  We were scheduled for the 10:30 start, but decided to just jump into the 10:00 start since it was supposed to start raining, which we forgot to prepare Sara and Johann for.  Just before the 10:00 wave started the lightning started and delayed everything.  The rule was no waves could start until 15 minutes after the last lightning bolt.  We finally got going at around 10:30.


The Start
The start was pretty well controlled.  Since they use a timing chip for each runner there is no rush to hit the course, though if you are going for time you should move to the front of the pack.  That will save you vital seconds of waiting at obstacles and running around Warrior Walkers.  There was quite a few people walking from the start that you had to contend with and zig-zag around.  The guy we were running behind at the start even stopped in the middle of the course to tie his shoe and nearly got trampled by Terri.  Let's use our heads people.  After about 200-300 meters we made a left turn and saw the first hill.  The hills on the course were killer.  I think we ran up about half-way and then walked the rest of the hill.

The Obstacles
The first obstacle was called Road Rage.  There were three rows of cars to climb over with the space in-between the cars full of tires laid out flat.  Not too difficult.  I used the "Dukes of Hazard" technique to get over the cars which was fun.

The next obstacle on the course was called the Treacherous Typhoon.  It was basically a high powered fan that also sprayed water, the same machine that they use to make snow in the winter for the ski slopes.  Not all that difficult, just run through the thing.  The water was pretty cold though and if you are out of breath from the running it can be a little uncomfortable.

There was supposed to be some sort of rappelling obstacle after the typhoon, but it never materialized.  I suppose the plan just didn't work out the way the organizers thought it would.  Instead, we did a wicked downhill on wet grass and I hit the deck about four times.  I was too far back on my heels due to bad downhill form and the trail gloves have zero traction back there.  On the future downhills I remembered to slalom down on my toes and I didn't have any more falls.  Since there was no rappelling obstacle they took us on an out and back course uphill/downhill through some trees.  This was the only spot on the course that had any real tripping hazards from all the tree roots on the trail.

The next obstacle was called Barricade Breakdown.  Up and over a 4' high barricade, then under a barbed-wire fence.  Repeat 4-5 times.  I slipped on the first barricade due to wet shoes but didn't fall.  Most people were crawling under the fences but I just dropped and rolled.  It was a lot faster and easier on my wrists and shoulders that are usually sore after a week of work.  Don't hate me.  I'm an innovator when it comes to approaching obstacles.

A nice downhill brought us to Chaotic Crossover.  This was a cargo net parallel to the ground about 10' up.  It also angled slightly towards the middle.  I ended up right next to the central support so I was able to use that as a sturdy hand-hold while I navigated the net with my feet.  Piece of cake.  Remember I'm an innovator.

Next was another nice uphill run to Blackout.  This was a low, black canopy that you had to crawl through, ducking under beams as you went.  It was dark, but you could see pretty easily.  It was about 40-50' (best guess) of crawling, so it was hard on the shoulders and left me a little winded when I got out, which was nice because then you started running back up the hill.

The next obstacle was the Cargo Climb.  As you might expect, this was a (nearly) vertical cargo net.  This was an easy climb, but it may be a real mental challenge if you are afraid of heights.  I'm not sure of the height, but it was pretty high.  There was a girl ahead of me that was having a little trouble.  She made it though with a little coaching from her friend.

Obstacle number seven was the only one I thought might be hard.  The Warrior Wall is a 12-15' (guess) high wall with 1" toe-holds and a rope to haul yourself up.  It really wasn't that difficult to pull yourself up.  If the toe holds were more slippery or you are afraid of heights then the wall may have been trouble but otherwise no trouble.

Next was the Teetering Traverse.  This was 2 X 8 planks with some toe holds ramping up to about 6' off the ground, down again to about 4', a short flat stretch, then up and down again.  The boards were a little slippery from all the mud we ran through to get there, but the planks were pretty sturdy and didn't wobble at all.

After that was one more hill to climb to get to the top of the Petrifying Plunge which was a multi-lane slip and slide back down a small hill.  It is in the picture below.  The plunge was not that petrifying. As a matter of fact, I got stuck half-way down.  My advice for this one would be to make sure you have a full head of steam when you jump in. 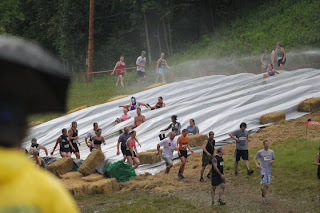 The last two obstacles are below.  The Warrior Roast and the Muddy Mayhem.  I think they are self explanatory. 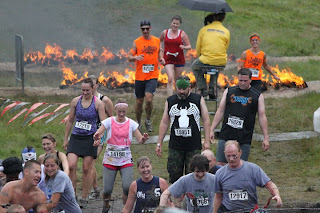 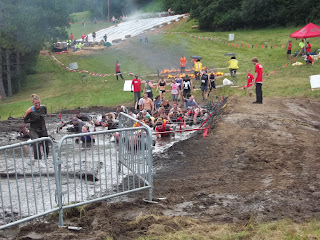 Here is Terri and I after the race... 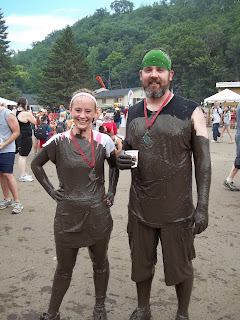 ...and a picture of my only injury.  My shirt got stuck on the last string of barbed-wire over the mud pit as I was standing up and I poked my hand trying to unhook it.  Not life threatening, and I am well into my recovery.  Like the good Dr. Crabb always said at Boy Scout Camp; "All bleeding stops." 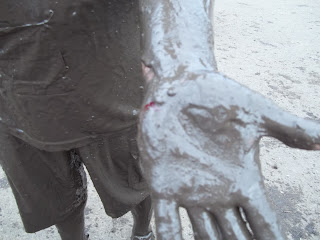 This was a fun race and I'll certainly do it again.  You should too!
Posted by Barefoot_Chiropractor at 11:35 PM