All the cool kids do reviews of stuff so I thought I had better do it too.  It is my hope that this review will gain me a lot of cool points.  What are cool points you say?  Well, if you have to ask, you don't have any.  But reading this review will get you a starter set of one cool point and an Abercrombie baseball cap (subject to availability) that you can wear everywhere you go.  That is how you start collecting cool points.  With enough cool points you can earn free stays at Marriott Hotels (subject to participation).  Sharing this post with a friend will net you two bonus cool points.  You know you want them.  But I digress...

When I tell people I run barefoot they always say, "Oh!  You mean in those toe shoes?"  I reply "No.  No shoes.  Barefoot."  Then I go on to say I do have a pair of minimal shoes that I wear sometimes when conditions call for it.  Those shoes are the purpose for this post.


A few years ago, humans started walking the earth.  We mostly ate stuff that we found growing in the dirt or on trees, and occasionally we bagged a deer for dinner.  Before the invention of the .270 caliber rifle we used spears to get those deer but before that we actually ran those babies down.  Its called persistance hunting and some tribes still do it today.  You see, deer can't breathe or pant all that well when they are on the run and will quickly overheat if kept running for too long, allowing your caveman ancestors the chance to stick a stone knife in the deer and have venison for supper.  Our feet allowed for that awesome running ability and shoes didn't come into the picture for quite a while.  Even when Sir Roger Bannister ran the first sub-four minute mile his shoes were little more than a few strips of leather and some spikes.


Vibram put their Five Fingers shoes (the "Toe Shoes") on the market in 2005 and the minimalist shoe market has been expanding ever since.  Merrell Released the Trail Glove in February 2011 and were the first major name shoe company to release a zero-drop shoe.  I purchased a pair because I wanted to get going on my transition to barefoot running without taking as much time to desensitize my feet.  (You can read some of that adventure here.)  These are my first minimalist shoe, so this is my first review.  Bear with me.


These shoes are pretty sweet looking.  Price is about $110 retail and you can find retailers on their website, or buy direct from there.  I would suggest going to a retailer and trying them on.  The fit isn't custom, but it will be snug to your foot and you want them to fit correctly.  Sockless is the preferred method for this shoe.

There is a few different choices of color scheme.  I liked this one called "Dark Olive and Kryptonite".  I wonder if they had to license the word Kryptonite.  Inquiring minds want to know.  The uppers are mostly a super-breathable mesh, bonded to the sole.  The mesh keeps your feet cool, and would help the shoes stay a little drier if you are running in wet conditions. 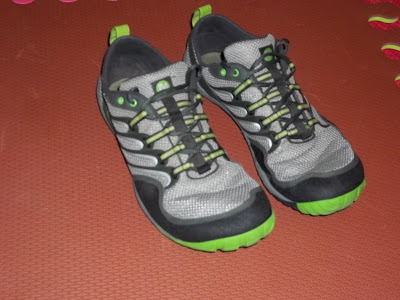 Side views of the shoes.  You can see how thin the sole is, and how flat they are.  Zero-drop!  The average running shoe has a 12mm drop from heel to toe. 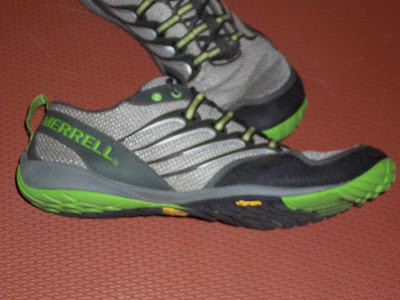 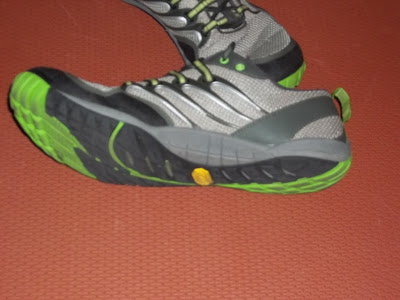 The soles are by Vibram.  That means a long life, like thousands of miles long.  You can see how the toe of the shoe curls up a little.  That is called toe spring and I'm assuming it is just due to the molding of the sole.  Not to worry though.  The soles are so flexible that they flatten out when you put them on.  The sole material comes up the front of the shoe to protect the tips of your toes in case you kick rocks on the trail.  Smart.

Here is one of the shoes rolled up.  If you are going to review a minimalist shoe properly, you have to do this.  It proves that the shoe can be rolled up, I guess. 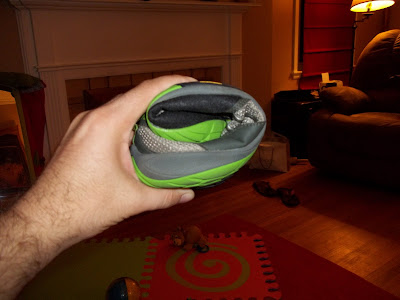 Here is the shoe on my dog.  Dogs love them, because Merrell doesn't test their products on animals. For the record, I have a big dog not freakishly small feet. 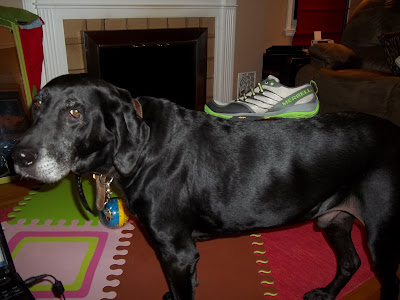 I started wearing these around just casually before I started running in them.  I love the way they fit close to your foot but they never restrict movement at all.  The large toe box isn't clunky in the least.  Running in them is also very comfortable, if using proper form.  I've seen some blog posts where people had a seam inside the shoe or something rubbing on their foot and they have a big hole in their skin by the end of a run.  I haven't had that happen to me.  The seams are very smooth inside.  The nail on my big toe does hit right behind the rubber at the front of the shoe on the mesh upper and I was worried that might cause some issues but it hasn't yet.  I have worn them to work a few times and one day wore them for 15 hours straight through the work day and part of Relay for Life.  They were comfortable all day.


If you have read some of my previous posts you know that I was trying to move to a forefoot strike before making "the big switch" so I was still running in a pair of New Balance shoes.  I finally put these shoes on for a run after my NB's got soaked on a run in the rain and were still wet the next time I was heading out.  I took the Trail Gloves out for a run that day, and I haven't put the NB's on since.  I was going to use the NB's for the Warrior Dash, but I ended up using the Trail Gloves instead.  Smart.  They cleaned up easily.  A few rinses in the hotel shower and then tossed them in the washing machine in an old pillow case when I got home.  Air dry them and POOF! Clean shoes.


I typically run on streets and paved trails, which is not technically what these shoes are designed for.  There are some lugs for traction under your toes, but they don't interfere on the pavement especially for someone like me who is newer to barefoot and minimalist running.  Some of the more seasoned barefooters don't like these shoes for pavement because of the bumpy sole.

I haven't run in them since the Warrior Dash, but it is starting to get dark a little earlier at night so my runs during the week will soon be in these shoes unless I can get out in the daytime.  I love running in them and they are as close to barefoot as you can get without being barefoot.  If you step on rocks, you will feel it through the shoe.  The pain will be significantly less however.  If you are interested in getting started in barefooting, but aren't ready to give up the shoes yet, these are a great choice.  Give them a try!


Merrell has a bunch of new minimal shoe styles coming out next year.  If you happen to be a Merrell executive, I'd love to help review them.  I know you were impressed by this review, so let's make it happen.  For a sneak peak of some of the upcoming styles, see what Last Place Jason had to say.  Personally I'd love to get my mitts on a pair of Rapid Gloves.  I think they look pretty sweet.

Posted by Barefoot_Chiropractor at 11:47 PM